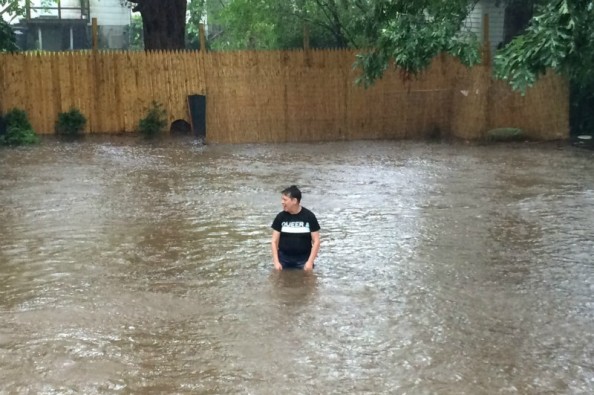 For over 30 years Jo Arnone has been a community fundraiser doing auctions for worthwhile charities all over the country. She was our founding auctioneer and has continued the traditions for THIRTY years, and has helped Leather Pride Night raise many thousands of dollars for LGBT and AIDS related charities.

On June 6, 2014, a powerful storm system stalled over northern Maryland, dumping over 3.5 inches of rain in less than an hour. Overwhelming the storm drains, the water poured into Jo’s yard to a depth of four feet, sweeping away her fencing and flooding her basement. In addition to damage to the house itself, the water heater and furnace were swamped along with many precious personal and historical items. Extensive mold mitigation will be required. They had flood insurance but it did NOT cover this because it was “flowing water” not “standing water.”

Jo’s friend Susannah Ravenswing is coordinating a GoFundMe campaign for provide support for her. Please considering sharing and supporting Jo:

The Leather Pride Night Committee is interested in what our entire community has to say about LPNXXX and beyond!  Please take this short 5-10 minute survey and give us your feedback, your ideas and even your time!

All Friends in the Leather & Fetish Community,

Leather Pride Night has brought the New York area BDSM/Leather/Fetish community together for 29 years. Known as LPN, for short, it was a see-and-be-seen event for leatherfolk from across the country. A must-attend for IML and ImsL, LPN’s auction, flea markets, raffles and boot-blacking raised thousands of dollars for NYC-area gay, women, AIDS and youth charities and from time-to time raised money for NSCF, legal and First Amendment movement funds. Hundreds of people volunteered, carried, built, moved and sold hundreds of garments, tickets, furniture and toys. But right now, LPN is at a crossroads. The committee is suffering from a lack of new members. The New York leather scene has changed dramatically in the past three decades, with organizations dwindling or going defunct. Bars and clubs closing and the cost of producing LPN in time, energy and money has skyrocketed, as the actual funds made available for giving has decreased.

At 8pm, on Wednesday, November 14, 2012, the Leather Pride Night committee will be holding an open forum & town hall to take suggestions, hear comments and, potentially, infuse new blood into this community institution.