NEW YORK CITY, June 11, 2015: On Thursday, April 2, the planning committee for the XXXII Annual Leather Pride Night  which had been scheduled for June 20, 2015, at the Eagle Bar on West 28th Street in Manhattan  voted to cancel the event and cease operations.

“We are proud of our legacy”, said committee co-chair J. Grant Anderson. ”For more than three decades, organizations and individuals in the New York-area leather community have come together to raise more than $350,000 for organizations that serve LGBTQ, HIV, and youth organizations as well as supporting NYC Pride, the National Coalition for Sexual Freedom, and the Leather Archives & Museum.”

Leather Pride Night (LPN) began in 1983 as Pride Night at the Spike, one of the citys two prominent gay leather bars at that time. It was pulled together hastily in response to a budget crisis at the Christopher Street Liberation Day Committee (CSLDC), the organization charged with producing the annual Gay Pride Day March and Rally. (CSLDC later became known as Heritage of Pride and currently as NYC Pride.) The funds raised that night helped ensure that the Pride events happened again that June, and it was decided to make Pride Night, now called Leather Pride Night, an annual event. For years thereafter LPN was one of the largest and most reliable funding sources for the gay and lesbian march and rally.

Early on, the focal point of the evening became a live auction of donated goods and services, with Jo Arnone, one of the founders of the Lesbian Sex Mafia (LSM), as the regular auctioneer. Other elements over the years have included a raffle, a silent auction, and a flea market for used leatherwear, books and magazines, and SM/fetish gear. Once the Gay Pride Day events had achieved a firm financial footing, LPN also benefited additional community beneficiaries ranging from the LGBT Center to the Anti-Violence Project to numerous HIV/AIDS charities.

LPN was founded and initially produced solely by Gay Male S/M Activists (GMSMA). Other leather and fetish organizations in the NYC metropolitan were later invited to help, and in the 1990s GMSMA formally turned over control of LPN to a coalition of community groups representing diverse gay, lesbian, pansexual, and heterosexual orientations. TES (The Eulenspiegel Society), LSM, and the Imperial Court of New York have been the most prominent and longest-running co-sponsors. Each organization listed as a sponsor was obliged to provide donations for the auction and raffle, volunteer workers on the night of the event, help with publicity, and other support as needed. In recent years, following the demise of GMSMA in 2009, LPN sponsors have also included, among others, Iron Guard BC, Jersey Amazons, Cinekink, MAsT Metro NY, MetroBearsNY, ONYX Northeast, and Pariahs MC.

However, more and more the driving force on the LPN committee has not been the official representatives of the sponsoring organizations but rather a number of long-serving, self-selected individuals, including some GDIs (God-damned independents) with no organizational affiliation at all.

As 2015 LPN co-chair Witti Repartee explained, ”New Yorks leather community has changed tremendously over the past three decades, and our city no longer has enough strong organizations willing and able to support this event. “While LPN XXXI turned out, against all odds, to be a big success in terms of both attendance and money raised  more than $9,000 net to four beneficiaries  this years committee members, almost all independents, realized that we simply did not have the resources to do it again this June. While some at the April 2 meeting argued for putting the event on hiatus for a year in order to search for new sources of support, the majority felt that Leather Pride Night has run its course as a broad-based community event. We look forward to seeing what ideas may emerge for a new project to bring the many parts of our community together. He also noted that the name Leather Pride Night was deliberately never trademarked, so anyone who wants to carry on its tradition is free to do so.

Leather Pride Night XXXII was to have benefited the Trinity Place Shelter, Iris House, the National Coalition for Sexual Freedom, and NYC Pride. LPNs remaining assets will be liquidated and distributed proportionately to these beneficiaries. The website, leatherpridenight.org, will remain up for six months, to the end of September, and then its contents will be turned over to the Leather Archives & Museum in Chicago.

The LPN Committee has one final event planned: Cruise Control 2: A Leather Pride Sea Tea on July 12, 2015. Featuring dinner, dancing, entertainment, and a cash bar, it is not a fundraiser but an opportunity to celebrate LPNs long and proud history, and to start brainstorming what could take its place. Tickets may be purchased at www.seatea.com.

The Leather Pride Night Committee is a coalition of NYC-based SM/Leather groups, and a number of committed individuals:

Any individual or organization sharing an interest in the projects of the Leather Pride Night Committee is strongly urged to find out more by contacting us. Our planning meetings are open to all.

We’re looking for volunteers to help out with the raffle and silent auction:

Please email LPNNyc@aol.com, and include your first, second and third choices. Thank you for volunteering!

On Sunday, August 17th at our first cruise with the Sea Tea, we’ll have a live auction of some very exclusive items. Here’s  a preview! 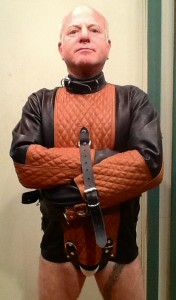 He’s back! David Samuel Menkes, leathermaker to the stars and a longtime LPN supporter, has created another of his fabulous two-toned all-leather straitjackets for us to auction off. In the picture here it’s modeled by the creator, who was known as “the universal bottom” back in the day. The size is nominally medium, but the highly adjustable leather straps allow it to fit most lucky “victims” except the very largest or smallest. Retail value is $1000!

Author/artist Thom Magister and publisher Perfectbound Press are offering one of the 12-inch action figures from his playful look at leather history, BIKER BAR: Bikes Beer & Boys, complete with a miniature motorcycle! The materials alone for this unique collectible cost $500, and when you add in the master’s eye and hand choosing the accessories and preparing the figure, the value is priceless. Thom is adding a “surprise” bag of vintage gear to accompany the figure and is accompanied by a signed copy of the book. (Photo by Thom Magister)

Pablo Greene’s “How to Kill a Superhero” – have a character named after you!

Author Pablo Greene (shown here in his own superhero costume) has donated signed copies of the first two volumes in his How to Kill a Superhero cosplay tetralogy, subtitled A Gay Bondage Manual and A World Without Daylight. The paperbound books themselves are worth $15 each, but to sweeten the deal, Pablo is offering to name a character in the next novel, due out next year, after the auction winner! How cool is that, having a character in an erotic fantasy series bear your own name (or scene name)? If you’re into gay bondage, cosplay, thrillers, or superheroes, you’ve gotta have this!

Party at La Domaine Esemar
Located in the foothills of the Berkshire Mountains, La Domaine Esemar claims to be the world’s oldest BDSM training and play facility, and it’s certainly one of the most elegant. Their legendary monthly parties for M/F couples and individuals run from 8 pm on “Satyrday” into the wee hours, with a champagne toast at midnight, and there’s brunch and more play from 11 am to 2 pm on “Sinday.” Each party features a guest Mistress or Master whose special interests set the tone for the activities. Lodging is not included, but the motels and B&Bs in the vicinity charge from $80 to $150. Secure, off-street parking IS included. Parties typically sell out quickly once they’re scheduled. If you win the certificate donated for auction, it will be good both for the rest of this year and next year, too. Call or email La Domaine to find out what’s scheduled and available .